Case Study: The Importance of Digitalization in the Area of Classical Music

The COVID-19 pandemic has affected all markets globally, along with businesses and consumers of event services. Of note, however, are the digital solutions, such as delivery applications, online streaming services, and online museum tours as well as online digital concert halls, which represent elements that have become mandatory options given the current circumstances.

In this post, we are going to explore the importance of digitalization both in the context of the COVID-19 pandemic as well as on a day-to-day basis.

Where do we stand in terms of our level of international digitalization?

Digitalization has become an essential part of the current structure of society. During recent years, we have been able to observe a big digital transformation in various forms, in all fields and sectors around the world.

“Is there a way that we can offer our product that we hadn’t thought of?” “What can we automate?” “How can we deliver our services to our customers more efficiently?” These are some of the questions that many of us will have to start asking ourselves.

Let us take a look at the following numbers: 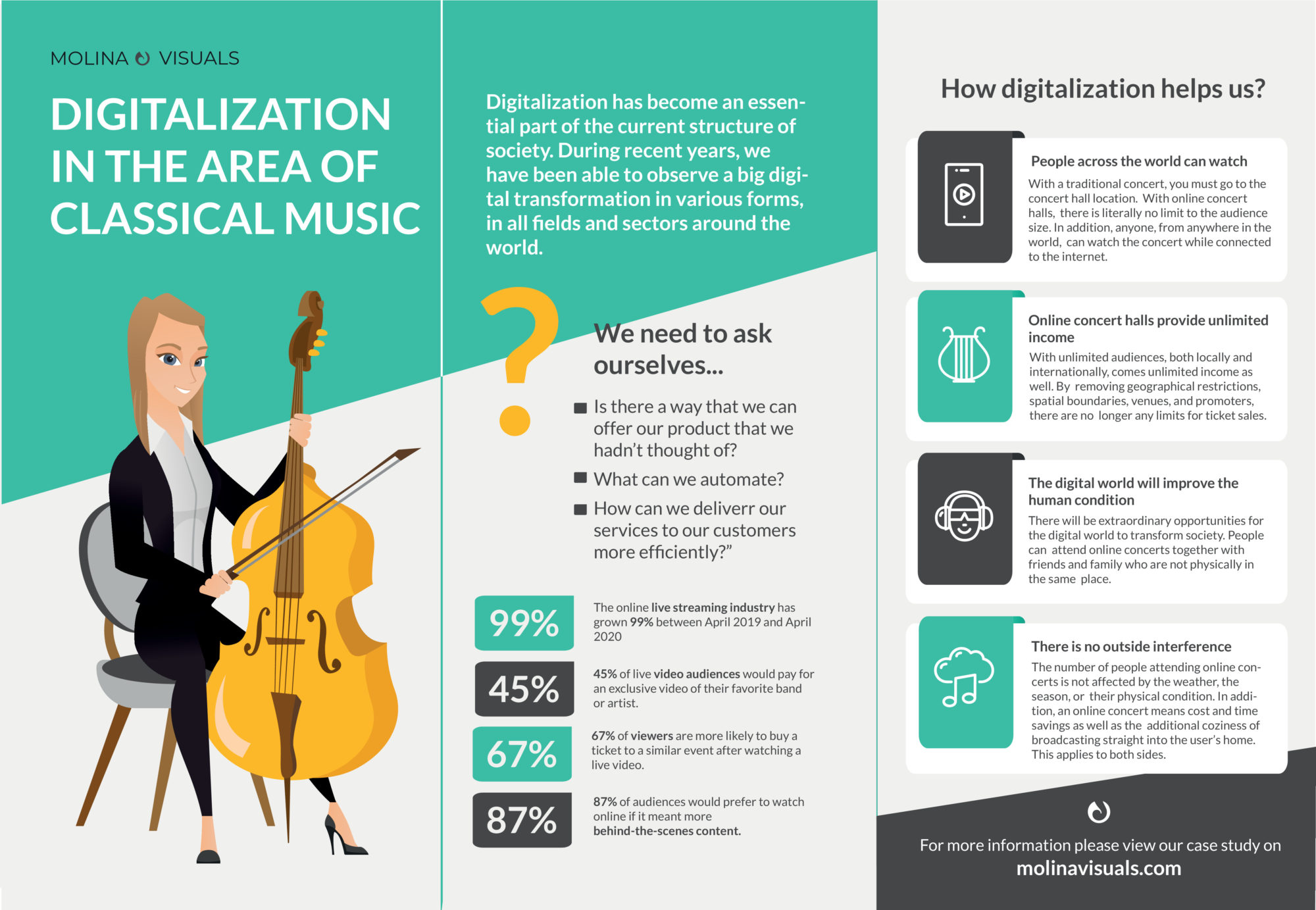 45% of live video audiences would pay for an exclusive video of their favorite team, band, or artist. (Source: Livestream and New York Magazine “Win a Free Mevo” Survey)

67% of viewers are more likely to buy a ticket to a similar event after watching a live video. (Source: Livestream and New York Magazine “Win a Free Mevo” Survey)

As Livestream stated, “Livestreaming concerts can turn an intimate set in a small venue into a global phenomenon. Venues and festivals are livestreaming events to reach bigger audiences than ever before. Giving audiences a platform to enjoy their favorite artists from anywhere in the world is changing the way we experience live music.”

How digitalization helps us

Next, we will explore a small part of the benefits that digitalization offers.

1. People across the world can watch.

With a traditional concert, you must go to the concert hall location. If you are in a different city or country, you will need to drive or fly to the place where the concert is being held. That takes both time and effort. But with online concert halls, there is literally no limit to the audience size. In addition, anyone, from anywhere in the world, can watch the concert while connected to the internet.

With unlimited audiences, both locally and internationally, comes unlimited income as well. By removing geographical restrictions, spatial boundaries, venues, and promoters, there are no longer any limits for ticket sales.

3. The digital world will improve the human condition.

There will be extraordinary opportunities for the digital world to transform society. People can attend online concerts together with friends and family who are not physically in the same place. Additionally, a new “togetherness” can arise when people can still attend and enjoy a good concert while not being able to do so in the same physical location.

4. Keeping people at the forefront is critical.

Music organizations have always been supported and encouraged by the people. This is very important because the relationship between an artist and their fans can have a huge impact on the economic situation of that artist or music organization. The potential to deepen this relationship can be even higher during online streams, if compared to a “normal” live concert, because it can offer the users the possibility to interact with the performers as well as with other audience members.

5. There is no outside interference.

The number of people attending online concerts is not affected by the weather, the season, or their physical condition. In addition, an online concert means cost and time savings as well as the additional coziness of broadcasting straight into the user’s home. This applies to both sides.

6. It looks towards the future.

As mentioned in the previous part, online concert halls are a handy tool for convincing users to attend a “real” concert next time. People do not need to leave the house and travel to a venue when attending an online concert. That is the reason why online concerts can work as a method to increase attendance for the next live concerts.

Music organizations need to consider how the principles of personal interaction can be extended to the online environment, in order to adapt to both the current situation and the post-pandemic one.

Mainly, this refers to good communication and functionality, such as live chat, chatbots, or smart searches, and can provide the answers businesses need to provide not only better customer experience, but also to support sales operations with an efficient purchasing channel.

Offering a dialogue function allows the audience to comment while enjoying the show. Afterward, the artists can respond orally or use the chat function to directly communicate with their viewers. This is often done during breaks in the show between songs. This allows a beautiful dialogue to be developed, which is both a personal (one-to-one) and public experience at the same time, because all participants can follow along.

Steps for digitalization in your organization

Conserving traditions and values do not need to stop organizations from changing. Digital technologies can substantially expand the customer base. In order to address certain customer groups, classical music organizations need to think about the channels they use.

Even so, many businesses are reluctant to take the step toward digitalization. Much of this is due to a lack of knowledge in this area, fear of the new, and probably current results, but this situation cannot continue indefinitely. Sooner or later, the competition will adopt the winning strategy—that of digitalization—managing to offer both much higher quality products and services as well as a lower cost and better delivery time.

Below, we will present the general structure with which any organization can begin the digitalization process:

We are living during times when information and the speed with which it is transmitted have become decisive factors in terms of achieving desired successes and proposed goals. Digitalization is the newest and, at the same time, the most important process of this century, having become a necessity in the lives and for the activity of contemporary people.

Digitalization is not so much about changing what a company or industry does as it is about how it benefits the consumers and the company.

So, we are in the middle of a digital revolution with varying intensity in many industries. Digitalization can reset consumers and industries, but it cannot reset market mechanisms. In other words, digitalization changes consumer behavior and transforms industries, but supply and demand as a mechanism for regulating value will continue to exist.

Are you ready to begin?

STAY IN TOUCH
Sign up for our newsletter and receive seasonal inspiration
in classical music marketing, creativity, and innovation.

Welcome to our community.

We are glad to have you! Every season, we will send you our digest with the most inspiring content in the classical music industry.

We will not share your information for marketing purposes with anyone outside our company. Click here to unsubscribe

We use cookies to ensure that we give you the best experience on our website. If you continue to use this site we will assume that you are okay receiving all the cookies on this site.ContinueRead more